“Ah, but a man’s reach should  exceed his grasp then what’s a heaven for?”

In a chess -player’s life, if he is lucky, he will have a chance to play a grand-master. Grand-masters are by definition rare and beautiful creatures. A complete player that combines, attacks, and defense with a style and grace that few chess-players in the entire world can match. Grand-masters take the game of chess and lift it up past from the mere point of competition and elevates it to the level of art.

What hope have we, mere mortals, to prevail against these demigods of Caissa?

It is said that a good player need a piece, a great player needs a pawn, a master needs a square but a grand-master throws a piece in the air and it lands on the perfect square.

I for so long felt like Prometheus chained to a mountain when confronted with playing one of these monsters until I learned a valuable secret, that GM’s, no matter what strength, are human too.

The GM I was to facing was in a simultaneous exhibition her name was GM Irina Krush. And the venue was the famous Brooklyn Chess Festival sponsored each year by the NYC Parks Department and Christian Whitted or Mr Christian as called affectionately by his score of students, from New York Chess and Games Chess Club.

The New York Chess and games Chess Club is located on 192 Flatbush Avenue in Brooklyn New York. It has programs for the scholastic and adult player, free play on Sundays and many special events such as a caged chess match between Chicago and New York. Stop by they are friendly and helpful and its a great place to get your chess on.

For those who do not know a simultaneous exhibition is a competition where a lone person is playing several people at the same time. The players are usually placed in a circle and the GM or Master usually goes and makes a move one at a time to all the players in the circle.

So here is my edge I have 29 other players playing GM Krush, if they manage to distract her in just the tiniest way maybe, just maybe, I will be able to come out on top.

There is also an endurance factor in a simultaneous. The GM will be on her feet for at least a couple of hours this could work in my factor 2.

The simul was to be held out of doors in the summer , this could also work to my advantage walking around in the heat could bring great dividends. I made sure that I brought a hat and had plenty of water in the hopes that exhaustion might set in.

So starting out I had 3 advantages:

Alas, I saw the GM had come prepared, she to had a hat, sunblock and plenty of water, thus neutralizing advantage 3. She was also young which might neutralize advantage 2. Thus, advantage 1 was the only solid one but 2 & 3 might play minor roles in this chess drama.

The fact that GM Krush played 29 other people also gave me plenty of time to think about my moves and see how she handled certain openings.

You don’t only have to play in a simul to get an edge. Other ways to get and edge against are GM are:

I have played GM Irina Krush 3 previous times. In her games I had Black 2 and White once. I had played her twice before she became a GM and once when she was one. The score was 2-1 in her favor. I only beat her when she was a very young girl. These games were not played in simuls so I had no edge.

I knew she had a penchant for D pawn openings and so made my preparations based on that. I was pretty sure that she would follow sound and sure development and she wouldn’t be up on the latest obscure theoretical data I was pretty sure she would try to get a solid position and work from there.

In the book Chess for Tigers by Simon Webb he suggested when playing a stronger player to play for complications and hope that they “fall into the swamp” before you do. Playing solidly against a stronger player can only lead to folly because by definition they are more adept at slow grinding positions. I had also ,like I said before, been on the losing end of MS Krush’s crushes and did not relish the idea of doing so again.

This made me realize that my opportunities would be based on how well I would do in the opening. Therefore I was determined to make this my battlefield. This leads to

Secret Way #3: be prepared and prepare a surprise.

GM Krush is a well known aficionado of 1.d4. The slow methodical build up of a solid position plays to her many strengths. You don’t get to be this strong by accident!

It was not 100% certain she would play this move, the London and Torre systems are very much the fashion nowadays.

I wasn’t sure that I would play this move. I did happen to glance over and noticed it was being played on another board ahead of me by a talented Junior. They played the moves rapidly and I saw what variation she was playing. Comforted that I could achieve the position i wanted I ventured forward into the breach!

Thank you Hamilton for the inspiration. 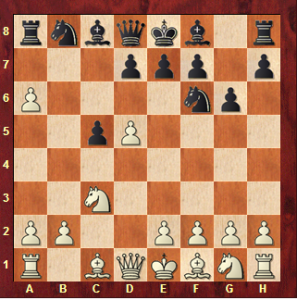 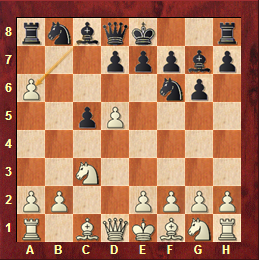 This is my idea, well not mine but pilfered from those smarter than I. Usually Black takes the Pawn on a6 and then  captures the white Bishop  on f1 after e4  and forces White to hand castle. The modern problem with this variation is that White play a4 at some point. Then through intricate maneuvers involving his Rook and Queen-side Pawn he solidifies his Queen-side structure. This plan has proven very difficult for Black in practice so new ideas are needed. I though if hand castling is just as good as regular castling wouldn’t the tempos used be more productive doing some thing else? So I choose to develop my K side pieces and  only then concentrate on the Queen- side.

at this point I wasn’t concerned with the Pawn push e5. There were 2 reasons for this: 1) e5 had to be calculated precisely and in a simul situation GM Krush would probably choose the simpler option and 2) My knight can easily be rerouted by Ne8 to c7 if necessary. This again would not lead to a standard Benko which again is not the kind of position that would suit my opponent. 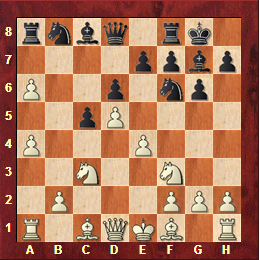 This was the move I was hoping for. I consider this move doubtful although the silicon monsters believe White still retain the advantage. More flexible would be simple development by Be2. Modesty, modesty always modesty! 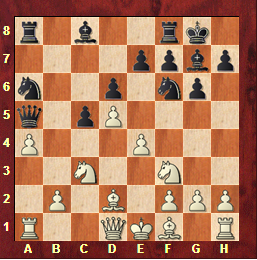 This is the point! Since the move a4 was played b4 becomes a weakness, a hole if you will. Therefore I am going to occupy the weak square (creating an outpost) and set up a base of operations there. The GM’s next few moves get the approval of the silicon beast. In looking at this position with non- silicon eyes I must say that Black’s experiment has lead to success. White has only 3 developed piece and is uncastled. Black has 5 developed pieces and is castled. Since a Pawn is usually worth 3 moves I would say that this position justifies the Benko sac. I would also say that Black’s position is easier to play. Interesting no? 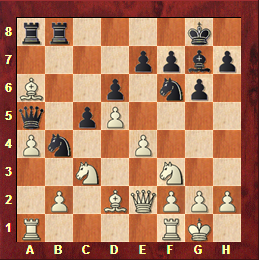 With this move White’s loses her opening edge. Exchanges must be made very judiciously in the Benko because White has a few structural defects. That is why endgames can favor Black even a Pawn down. A better move was 14.Bg5

Mistakes tend to happen in bunches. This move loses a Pawn. The infernal machines think exchanging the Queens is completely equal. 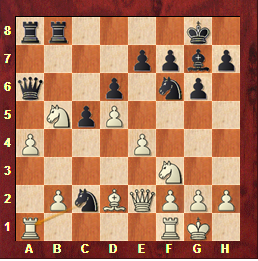 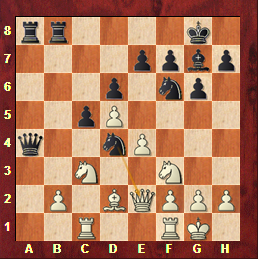 Those miserable bucket of bolts say this is a second best move. They prefer 15…Qb3 16.e5 Ne8 and maybe they are right but I know in general knight exchanges favor Black in the Benko, so I was happy to make one. This leads us to:

Secret Way # 4 : when having the edge, keep it simple! 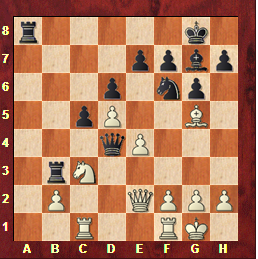 This was the hardest move of the game for me. I of course examined 17…Qb4 but since my Queen was leading the attack I could not see a break-though. I decided to let the Rook take the lead hoping that this would free her majesty for other duties more appropriate to her station. 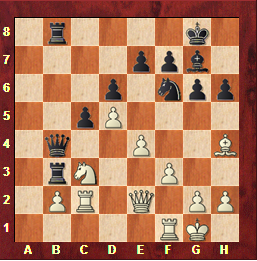 The critical computers admonish my move and suggest that I play a complete different plan with 22…Kf8 or 22…g5 but what human could resist 22…Rb8?

This is the critical position . Through not played with precision according to the programs (of course because GM Krush and I are not cold, callous ,calculating soulless machines!) we have reach a position which we both, no doubt, thought that Black had the edge.

This position is looking great for me by human standards. That dream crushing silicon beast though shows me the folly of my ways! 23.Ra1 holds everything 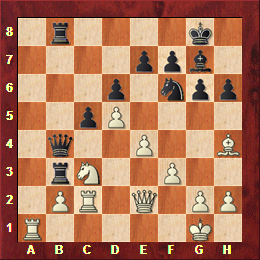 23. Ra1!! holds, “Your enemies become strong on what you leave behind” -The Godfather 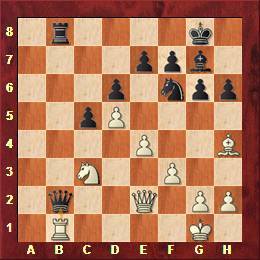 Black must now give up his Queen.

It turns the position in a mess. The computer still likes Black slightly but I don’t. This is not what I signed up for. Of course I saw none of this at the board. 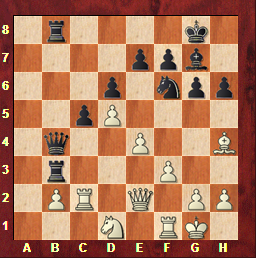 I dodge a bullet and GM Krush loses the game. What would have happened on 23 Ra1!!? I don’t know, I just don’t know (sniff). This sad move leads us to

Secret Way#5: Ya gotta be lucky!

opps lateral moves are the kind of moves most often missed by strong players.

One of the most effective ways of proceeding when one has the advantage is to take away your opponents dreams.

Without dreams hope cannot exist- Me I said it! 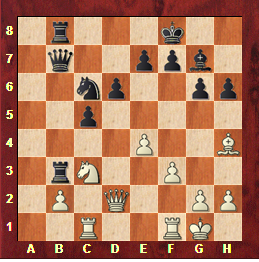 Stopping any e7 ideas. Dare I say it, I will! The rest is a matter of technique 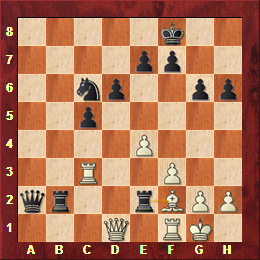 The Rooks are certainly the stars of this show!

So to recap the 5 secret ways you need to beat a GM:

I want to thank GM Krush she was very gracious in defeat she is truly a class act! I also want to thank my fellow players if you hadn’t of struggled so hard I might not have won! To everyone else I wish you the best of luck hunting the most satisfying of prey, the elusive GM.