Hello , Chess for Children kids! It’s me again NM Steve Colding and today’s topic is about my favorite chess opening : The Morra Gambit.

A Wise Sage Showed Me

I was a member of a chess school called the Great Black Bear School of Chess.

At that time I was a bit of a chess worm, meaning that I studed a lot of books.  In my heart I have always loved playing 1.e4 and when my opponents played the Sicilian I always played the latest, fashionable move. This was however impractical because it meant I had to study for countless hours for countless variations.

1. e4 is the move  that best reflects my style and ambitions. I decided very early in my chess career to always fight for the initiative and set my opponents tough problems from the first move onwards.  The struggle at the board is   the most fulfilling part of chess.

My mentor and sponsor in the Black Bear School (among others) was a gentleman call Willie Johnson. His nickname was Pop and he was a strong expert. Willie had also a very strong work ethic despite the fact that he worked full time as an electrician for the LIE.
I owe a tremendous amount to Pop and one of the things I owe  was he introduced me to the Morra Gambit. So,   I dedicate this and all future articles on the Morra, to my friend,  my mentor and fellow Black Bear, Pop Johnson.

The reason for this article has comes from the blog post by my friend Andre’ Harding. It is entitled Chess Opening Discussion and you can read it here.

The format that I am going to use Andre’s article  ( or else this article will turn into a book, hmmmm) using his same chapters and break-ups in the section and offering my counter arguments.

Some Chess Openings get no respect and one of them is the Morra Gambit. For the life of me I can’t imagine why this is so. Sacrificing a Pawn for development is as old as chess itself yet to sacrifice a Pawn in the Sicilian is somehow sacriligous and cannot be allowed to stand. To that I say pish posh! Chess is for the bold not those people who have an abacus and count Pawns like a miser would pennies.
Mr Harding says that Morra players strive and hope for this position and that Black needs to survive long enough to face this and goes on to talk about traps.  He is quite correct but the Morra is more than just traps.
I have always wondered why most people think the Morra is not based on sound positional principals.

The Solid  Theoretical Basis for the Morra

In order to discuss this I will go back to the 3rd move of the Gambit. (see diagram below:) 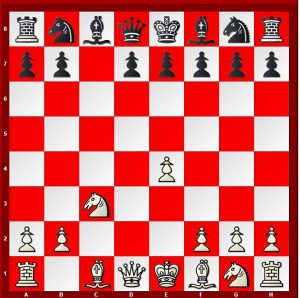 Let’s look at the initial diagram at the cost of a Pawn White has a development advatage. In the Opening this is very important and that is the reason why it is so prone to traps.

The road to paradise is narrow

The critics say that White does not have enough for the pawn. Well, let examine how many tempos White has for the Pawn, First his Knight is out, secondly Black will have to make at a minimum 2 more Pawn moves to bring his Bishops out. That is a minimum of 3 moves for the Pawn which is exactly what you are theoretically supposed to have. So, theretically, White has a dynamically balanced postion.

Remembering that winning positions only come from strategically sound ones is it any wonder that even a slight misstep can cause immediate defeat? This to me is a further reason we play the Morra to make sure our opponents  develop along sound and natural lines.

Traps in the Morra Gambit

There are many traps in the Morra Gambit many of which will be enthusiatically portrayed in future articles and videos. This is a fun part of the Morra. Who doesn’t love skewering our opponents on the hook of theoretical knowledge?

Andre shows 2. One with the White pieces and one with the Black. The Siberian trap has won many a games for Black unfortunately it is shown to be practically refuted by the next game.,

He then goes on to reccomend his perferred move order against the Morra which in actual fact is called the Taylor Defense.  It is called that because IM Tim Taylor  wrote an outstanding book on the subject. The name of his book is “How to Defeat the Smith Morra Gambit 6…a6.  It was published in 1993.  Andre’s suggestion is quite a good and practical one and is one of the best ways of handling the Morra. Taylor’s book was an essential lifeline to Sicilian players against the Morra.
So, now I had to read the Taylor book and compare it to Esserman’s book, Mayhem in the Morra.I found out that Esserman’s main premise was to play 8. Bf4 but ( and I must emphasize that I love his book) he didnt address Taylor’s main premise of 8… e5 after 8.Bf4.
This amounts to a gaping hole within the analysis and left me with a burning question what to do? So like most players nowadays I had to refer to the souless chess computers for an objective way of handling it.
I did an extensive analysis with my trusty chess engines and came to several conclusions which I will present here.
Ther 3 moves I looked at was 9. Ng5, 9. Be3, and  9. Bg5.
9. Ng5 was slightly worst for White but not losing.
9. Be3 was equal and 9.Bg5 was slight better for White but far from winning. I willl publish all my anaylsis in some future project (Maybe a book?).

Critical Position of the Taylor Variation

So What’s an Attacker to Do?

Well, when confronted with a brick wall there are several things you can try:

In this instance prudence suggests that we go around it. Why, because Esserman didn’t anaylze Taylor’s suggestion of 8…e5 and Taylor’s example of it was pretty powerful (Wolff Taylor New York 1983). I felt that after analyzing with my comps that it must be correct.  So the fault of where White lost his initiative must lie in the fault of White’s 8th move.

Mayhem in the Morra  has Another Omission.

All of these obstacles can seem pretty frustrating to the average Morra player but take heart I like the good sherpa that I am will lead you to solid ground.

When you find yourself with possibilities in the present that you do not like it is often reasonable to seek. The place I looked for other ideas to play on White’s 8th move was the book The Morra (Smith) Gambit by Janos Flesch published in 1981.  The move I found was the move 8. a3!. In many ways this is the perfect reply to Black’s a6. White suffers by  premature placing of his dark squared Bishop and the move 8…Bg4 leads to advantage for White according to both Flesh and Taylor. This move is not mentioned in Esserman’s book yet it seems to fulfill a lot of the requirements of the position. These are the ways that you can justify 8.a3!:

The Refutation of the Taylor ?

Well, dear reader,  I could give you those now or later (in my book) but I would deny you the pleasure of exploring the possibilities yourself. Suffice it to say that the reporting of the death of the Morra is slightly premature.

I plan to play the move 8.a3! in my tournament games and because of that I think you players might consider naming it the Colding Variation of the Taylor Variation of the Morra Gambit. Hmmm, just a thought.

If you like out content then why not sign up for a membership. This will encourage our minions to work even harder on your behalf! If you want to you can do so here! 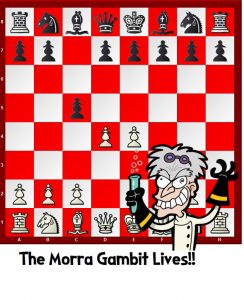 Chess for Children presents our award-winning,  course
” How to Teach Your Toddler to Play Chess”   Sign up today!