Hello Chess for Children kids! My name is Alexander Aleksandrovich Alekhine. I was a Russian chess Grand-master and the fourth World Chess Champion. So listen to my story about how I started playing chess.

My youth was privileged because I was born into a wealthy family in Moscow, on October 31, 1892. The name of my father was, Ivanovich Alekhine. He was a landowner and Privy Councilor to the conservative legislative.  My dearest  mother, Anisya Alekhine,  was the daughter of a rich industrialist.

I was first introduced to chess by my mother, an older brother, and an older sister.

My first known game was from a correspondence chess tournament that began on December 3, 1902, when I was ten years old.  Then I participated in several correspondence tournaments, sponsored by a chess magazine, in 1902-11. In 1907,

I played my first over-the-board tournament. In 1908,  Surprisingly,  then I won the club’s Spring Tournament, at the age of 15. In 1909, I won the All-Russian Amateur Tournament in Saint Petersburg.

For the next few years, I played in increasingly stronger tournaments, some of them outside Russia. At first I had mixed results, but by the age of 16 I had established myself as one of Russia’s top players.

In April-May 1914, a major St. Petersburg, 1914 chess tournament was held in the capital of the Russian Empire, in which I took third place behind Emanuel Lasker and Jose Raul Capablanca. By the age of 22, I was already among the strongest chess players in the world.

During the 1920s, I won most of the tournaments in which I played. In 1921, I left Soviet Russia. I  the represented France since 1925 until my death.

In 1927, I became the fourth World Chess Champion by defeating Jose Raul Capablanca. I defended my title many times and even lost it to Max Euwe. Training very hard I  then defeated Euwe and got my title back!

My character was criticized because I never gave a rematch to the man I had won the title from, Capablanca and as a result we became bitter enemies.

When World War 2 broke out I was trapped behind enemy lines and was forced to play in weak chess tournaments by the Nazis.

I am mostly known for my fierce and imaginative attacking style, combined with great positional and end-game skill.

Through chess, I developed my character. Chess first of all teaches you to be objective. You can become a big master in chess only if you see your mistakes and short.

I was also the author of over 15 books.

When the war was over, I still retained the title of World Champion and sadly on Sunday, March 24, 1946, I died.

I remain to this day the only player to die with the title.

If you would like to read more about me there is a great article  here.

If you would like to read about Capablanca, my rival you can go here.. 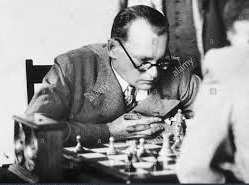