This spooky chess legend was discovered by Chess for Children  on the site Chess Graphics  which you can visit here.

This is a loose translation of a story which appeared in Les Cahiers de l’Echiquier Français (november-december 1936). Story, problem and drawing are by V. Barthe 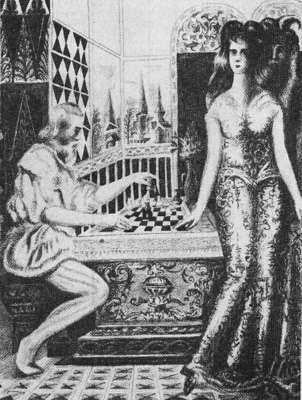 Paulo Boï was the greatest chess player of the 16th Century as well as a poet, soldier and sailor. Legend has it that in the course of a long and eventful life he once played the devil. The story goes as follows:

In front of a church in the small town of  Calabria,  1570, Paulo Boi  met a young woman of startling beauty. Her penetrating and enigmatic eyes burnt with a feverish flame. The conversation they so quickly fell into soon turned into friendship and Paulo Boi learnt to his astonishment that the young lady played chess. His astonishment was even greater when, having started a game, he realised that his opponent was unusually strong. The game was long and hard fought but soon Paulo Boi believed that he had a winning position. He was about to announce mate in two in the position below. 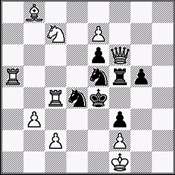 But to his stupefaction at that moment he suddenly saw his white queen turn into a black queen and the beautiful woman said to him – “Ah Paulo, you will not win as now I have a queen and you have none.” 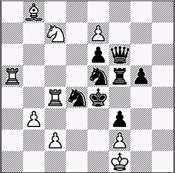 However, as she said these words he noticed that he could still win the game, it was still mate in two!

The young woman had also realized and frowning left the room and disappeared without another word. Paulo Boi had realized that he had been playing against the devil all along.

* I change the text from the original just to make it easier to read.